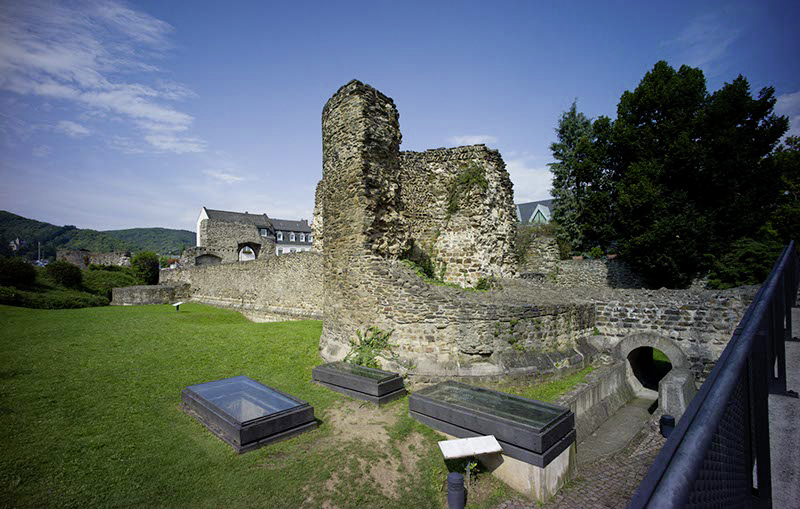 Wherever you go in Boppard, you will be reminded of its Roman history. Boppard was one of the most important Roman settlements on the Middle Rhine. As a result of Julius Ceasar’s conquests, this region was also under Roman rule. Boppard began as a Celtic settlement with the name “BAUDOBRIGA. The Romans made their first settlement at the entrance to Mühltal, to the west of the town. In the middle of the 4th century, they built a fortification which they named BODOBRICA which later became BOPPARD, the present-day name.

The fort was built near the Rhine and impressed by its size. It was 308 × 154 metres and formed a rectangle of 4,7 hectare. The walls were 3 metres thick to the land side and 2,5 metres thick to the Rhine side. With a height of 9 metres and 20 horse-shoe shaped towers to the land side, each 27 metres apart, the wall made a very powerful fortification.

When times became too troublesome for the Romans, they left the Rhine and the fort became the core of the present-day town. Today Boppard is a lively, modern town but the Roman roots can still be seen. The remains of the Roman Fort surround the town centre and are the best example of a Roman fort in Germany.

You will find the Roman Fort in the Angertstrasse / on corner of Kirchgasse in the town centre of Boppard. The ruins are open-air and you can visits at all times free of charge.